Reflections on The Peter and Will Anderson Trio Concert, September 23, 2017

The enthusiastic and appreciative audience at the PAJA concert on Saturday, September 23, widely acclaimed the night’s activity as an artistic triumph.  They luxuriated in the joyful music presented by Peter Anderson on tenor sax and clarinet, Will Anderson on alto sax, clarinet and flute, and Felix Lemerle on guitar.  The program consisted of favorite songs from the Great American Songbook and the standard jazz repertoire, lesser known pieces by popular composers, and works by lesser known artists, including the 30-year old Anderson twins themselves. 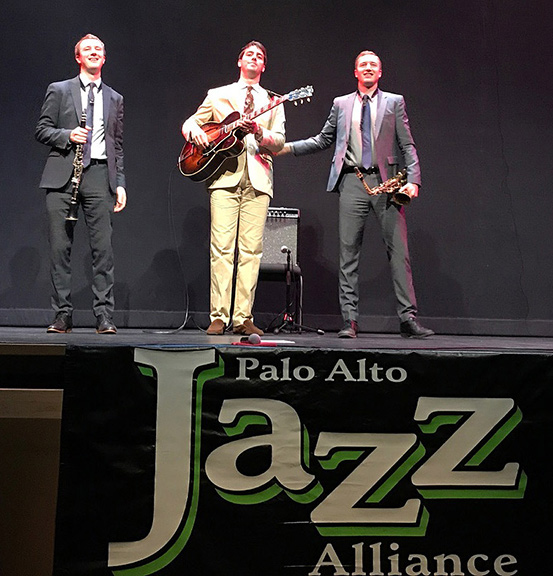 The first set began with three widely known selections, My Favorite Things, I’ll Be Seeing You, and My Shining Hour.  Will Anderson back announced them, recognized they were so well known that many audience members probably knew the lyrics and might be tempted to sing along, and promptly displayed his biting wit by acerbically pleading “Don’t!”  Next came the beautiful Skylark, and Purple Gazelle, an obscure, Calypso-influenced Duke Ellington tune, and works by two of their favorite, but little known, composers, Blues for Joe, by Will’s “older by 10 minutes” twin Peter, dedicated to their recently deceased instructor at Juilliard, Joe Temperley, and Appalachian Mountain Song by Kyle Athayde, a native of Orinda, CA, who now resides in NYC.  Will disclosed that Kyle composed it for the Andersons and a 30-piece string section, and Will congratulated guitarist Felix Lemerle for making good on his claim that he could fill in for the entire string section.  The set concluded with O Grande Amor and a strong version of Cherokee, deftly swung by all.

The second set kicked off with The Preacher, the humorous, funky, hard bop, mid-‘50s classic by Horace Silver, and Our Love is Here to Stay.  The trio then played the Bud Powell etude, Bud on Bach, and Skylark.  The mood continued with I Can’t Give You Anything but Love, and then perked up with Devil’s Advocate and Moonglow.  The evening finished with an upbeat version of I’ve Found a New Baby.

The Peter and Will Anderson Trio with Felix Lemerle rewarded the audience with a sublime performance, and the prolonged applause indicated it understood what Quincy Jones meant about the Anderons, “You are the dudes of the future.  You have made my soul smile.”

PAJA also gratefully acknowledges the contributions of the Sequoia Union High School District, District Administrative Vice Principal Secretary Natasha Rivera, and the City of Menlo Park, especially Recreation Coordinator Matt Milde, for awarding PAJA a Grant for the Arts to host a program at the Center for Performing Arts that presents a cultural activity to the local community.

In its 25th year, PAJA will continue to present jazz to the Peninsula community and fulfill our nonprofit mission to support jazz education.  Keep Jazz Alive! 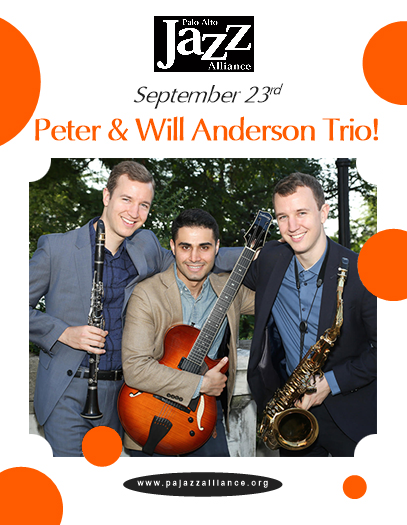 The Palo Alto Jazz Alliance was founded in the fall of 1992, and we have cooked up something special for our 25th Anniversary concert: The Anderson Twins Trio, featuring Peter and Will Anderson, “virtuosos on clarinet and saxophone” (New York Times). Though well known on the east coast, their appearances on the left coast have been fairly rare, and this is an opportunity to see what the rest of the country has been raving about. Please, please, check out their website: www.peterandwillanderson.com and click on “Videos”  to sample their brilliant takes on standards and jazz classics.

The Andersons have performed with the Lincoln Center Jazz Orchestra, the Village Vanguard Orchestra, the Jimmy Heath Big Band, Cecile McLorin Salvant, and many more—at venues like the Blue Note, Kennedy Center, DC’s Blues Alley, and the New Orleans Jazz Festival.  Their trio at this coming concert will be completed by guitarist Felix Lemerle.

WHERE:  Menlo-Atherton HS Center For The Performing Arts, 555 Middlefield (at Ravenswood), Atherton. Plenty of free parking in a well-lit parking lot.

“You are the dudes of the future. You have made my soul smile.” (Quincy Jones) 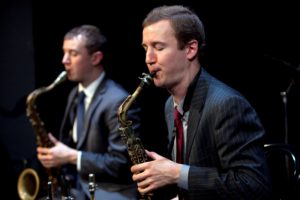 PAJA’s Silver Anniversary concert will showcase the Peter and Will Anderson Trio, giving Peninsula jazz fans an opportunity to see the heralded Anderson twins, virtuosos on saxophone and clarinet. They’ll treat us to a program of American Songbook classics, a bit of New Orleans, and a few originals. It promises to be the crowd-pleasing, spirit-lifting performance of the year.

Hear these reed virtuosos extraordinaire September 23rd at 7:30 pm
at the Menlo-Atherton Center for Performing Arts, 555 Middlefield in Atherton.

NOTE: Save $10 per ticket by joining PAJA today and getting the member ticket discount. Click on “Join PAJA” for information.